‘Rise of the Settler’: was this Britain’s first proper values election?

This article, written by TCC’s David Evans, was originally posted on the New Statesman’s Staggers blog on June 1st, in the run-up to the election. It’s based on a poll we commissioned before the Labour surge and – despite being off in terms of numbers (like most polls) – we think the shift that it describes towards values-based voting remains relevant. Pieces like this one in The Economist make a similar point about the realignment taking place.

The Tory poll lead remains intact, just about. This despite an awful fortnight, which might easily have hollowed out Theresa May’s vote much more.

So, who exactly are the people who have buttressed her position? Polls suggests socio-economics and region are becoming less important. And while age has partially replaced them, it doesn’t seem enough by itself. Being wealthy or from the north often come with political and economic interests, after all – which mean it makes sense to vote one way or another. It’s harder to identify the ‘interests’ that unite the 70-year-old social renter in Teesside with the 70-year-old homeowner in Surrey – both of whom still look likely to plump for the Tories.

What, then, is the bulwark of the Tory lead? What’s their rock-solid base?

We did analysis to answer this question, based on a poll we commissioned earlier this month (in conjunction with Cultural Dynamics, creators of the British Values Survey). And we deployed Values Modes, the psychographic tool we previously used in contributing to The Cruddas Review, to dig deeper.

The tool builds on the work of Shalom Schwartz and the World Values Survey, to establish core motivations. It splits the population into three groups: altruistic Pioneers (driven by ethics and fulfilment), aspirational Prospectors (driven by ‘getting on’ and what others think), and socially conservative Settlers (driven by safety and security).

A person’s values group is identified by a short questionnaire, developed through long-running opinion research since 1973. Questions vary from the everyday (i.e. whether someone keeps up with trends in home decorating) to the more political (i.e. support for longer prison sentences).

For our analysis we included the values questionnaire, and weighted for demographics and turnout likelihood. We looked at the values differences in voting intention. And we then spent some time comparing this with past research into the values breakdown of the respective parties’ vote. Significantly, the original fieldwork was from before the current Labour poll surge.

The findings are striking, showing a mass Settler migration to the Conservatives. Among this group – who comprise 32% of the population – 57% said they’d vote Tory, compared to just 18% Labour. The more confident Pioneers and the more liberal Prospectors seem to be sticking with Labour. But it’s the Tory:Labour ratio among Settlers that’s really striking.

As the chart shows, this ratio has been getting more one-sided over the past decade or so. And in recent years a trickle has become a torrent – with Settlers switching to the Conservatives both directly from Labour, and indirectly, via Ukip. This process may have been accelerated by Corbyn, with his perceived lack of patriotism and mixed messages on defence. But it goes back much further than this. 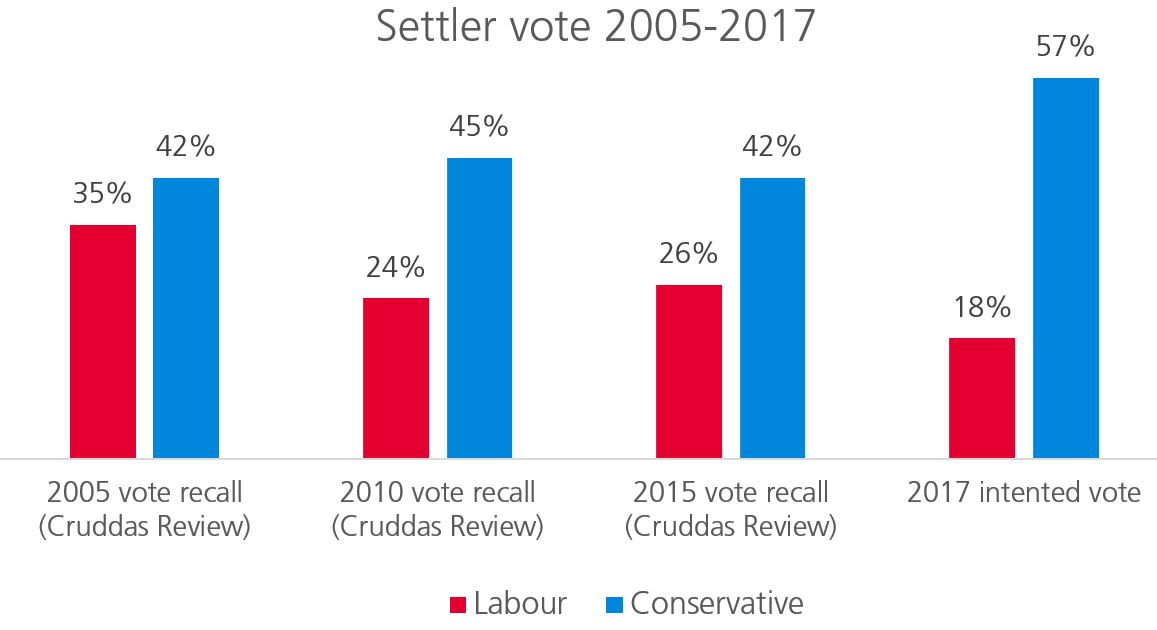 So, who are these Settlers?

They’re traditionalists, worried about threats like crime, who are more pessimistic, less trusting and often older. They want things to be familiar, predictable and safe, with clear rules everyone abides by. They’re drawn to strong leadership, and think in ultra-local terms. And, while politically tribal – historically voting along class lines, for the main two parties – they can be volatile or anti-establishment if faced with rapid change. They led the Ukip surge pre-2015.

They overlap in places with what David Goodhart calls ‘Somewheres’ (as opposed to ‘Anywheres’), and with what Jonathan Haidt calls ‘Nationalists’ (as opposed to ‘Globalists’). At a more textured level, they are the Leave voters who opt for tangible, familiar products like P.G.Tips or Richmond Sausages, over abstract brands like Instagram and iPlayer.

Settlers are anti-migration, and formed the bedrock of the Brexit vote. The heatmaps below show this (with warmer colours showing stronger sentiment). That said, Settlers are often also economically leftist (if fiscally conservative), and communitarian. They’re as uncomfortable with big business as the ethical and socially liberal Pioneer grouping.

Political parties usually win with a mix of Pioneers, Prospectors and Settlers. In the past, Labour and the Tories have just about held their values coalitions together, even when they’ve lost.

But if, in an election haunted by the shadow of the Manchester attacks, Settlers continue to opt overwhelmingly for the perceived national and cultural security offered by the Conservatives, then that would be a major shift. This is especially true if – as polling since we did our analysis suggests – young, affluent and urbane Pioneers reject this. Supplemented by the more liberal Prospectors, it seems they are packing in behind a Labour Party wooing students and cosmopolitans.

Commentators are already noticing this realignment (£). If it continues then we could be looking at the first election to be fought and won on the basis of ‘values’ rather than ‘interests’.